Seasoned fries were the culprit.

I was 21 years old, fresh out of college, and at 130 pounds soaking wet, wasn’t exactly counting calories. So when I ate lunch at J.J. Muggs, a burger place conveniently located across the street from the design firm where I worked, I always ordered crispy, golden, fried potatoes with my meal, because, well, who wouldn’t?

But minutes after returning back to the office, I would break out in a sweat, turn pale, experience stabbing abdominal cramps, then run like hell to the bathroom. That was when I learned that the term “explosive diarrhea” was a thing.

After a few doctor visits and some cuisine-based detective work, I discovered that the fries at J.J. Muggs were in fact “seasoned” fries, sprinkled liberally with garlic powder and garlic salt and bits of chopped garlic and probably fried in pans made of garlic bulbs.

And I discovered that I was allergic to garlic.

Technically, according to my doctor, I didn’t have a garlic “allergy.” I had a garlic “intolerance,” meaning I didn’t have an immune system response but experienced, in his words, “unpleasant symptoms.” I felt the aforementioned “explosive diarrhea” fell into this category fairly well.

I wasn’t devastated at the thought of never eating garlic again. Growing up, garlic was not a staple of my Midwestern diet of hearty casseroles, pork chops, potatoes, fried chicken, and sweet corn. Oh, and Maid-Rites! This is a loose meat sandwich type of thing, and it is heaven on a bun. Seriously, I would choose this as my last meal if I ever was going before a firing squad. And Maid-Rites definitely do not include garlic.

Also, the smell of garlic is horrifying to me, especially when it emanates from someone’s mouth or pores the day after they ate it. Some mornings I get on the bus to go to school, and the entire interior reeks because someone ate garlic shrimp the night before. Might as well drape the rotting carcass of a dead cat around your neck or bathe in spoiled milk mixed with rotten eggs, because it’s all just horribly stinky to me.

And is it really worth it to smell like the kitchen vent of an Italian restaurant just so you can eat one stupid herb? The Gardening Channel lists 94 other herbs one can cook with. Why use garlic when you can use herbs with names such as Dittany of Crete, epazote, horehound, or Johnny Jump Up? Those would make you a much more interesting person in the long run, and infinitely less smelly.

To me, garlic is aggressive and negatively overwhelms anything it comes in contact with, sort of like the Donald Trump of cuisine. I bet you could coat a kitchen sponge with tomato sauce and garlic and tell someone it was lasagna, and they wouldn’t even notice the difference. Some chefs say garlic desensitizes your tongue to more delicate flavors. Probably true, because I’ve notice that it’s used heavily in low calorie dishes because all the actual good tasting stuff (e.g. butter) is absent and garlic masks the blandness. It’s also used a lot in vegetarian dishes because, well, a carrot or quinoa is never going to knock your socks off on its own.

When I tell someone of my garlic intolerance, inevitably I get the reaction, “Oh, I love garlic!” Well that makes me feel just dandy. It’s like if someone tells you they’re blind, and you respond, “Oh, I love seeing!”

Breaking news: I don’t actually care at all that you enjoy eating the bulb that causes my colon

to explode like Mount Vesuvius. Wouldn’t it be super if, after I explain my predicament to someone, they simply gave me an understanding nod and realized that their herbal preference turns my insides into a war zone? I mean, if someone tells me they go into anaphylactic shock when they eat nuts I just say, “I’m sorry” and don’t share that I love peanut butter so much that I want to rub it all over my face.

Sometimes people will react with, “But garlic is good for you! They sell garlic tablets at the health food store!” Aside from the fact that it’s not certain whether garlic is effective in treating any medical condition, and the medicinal use of garlic has not been approved by the FDA, just remember that health food stores also sell $9 bottles of Coconut Charcoal SuperAde juice. Yep, that’s right, a juice full of black, activated charcoal. It’s good for you, really. No matter how black your teeth turn. 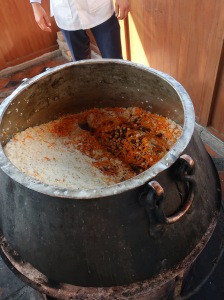 A cauldron of Uzbek food, and not a clove of garlic in sight.

On the down side, a garlic intolerance can make the whole restaurant experience a tad frustrating. First I scan the menu to make my first choice, but I also have four to six other options on standby in case garlic is used in anything. Then I carefully explain to the server my situation. Because I’ve traveled around the world and lived on five continents, I’ve learned to recite “I’m allergic to garlic” in many languages, including last year when I learned to say it in Uzbek for our trip to Uzbekistan (“Men sarimsoqqa allergiyam!”).

It definitely sounds the best in French: Je suis allergique à l’ail (juh-swee al-ur-zheek uh-LIE). It’s almost like I’m reciting a poem or saying the name of a new Givenchy perfume. Sometimes I just go to a French restaurant so I can say that over and over.

And now we live in China where 80% of the world’s garlic is produced (I know, I know, the irony of it all). “I am allergic to garlic” in Chinese looks like this: 我对大蒜过敏. Disturbingly enough, that middle character looks a little like me in the bathroom after eating garlic.

mean, except no matter how many times I try to say it JUST like the woman’s voice on Google translate, the servers just stare at me blankly. I’m sure I don’t say the tones correctly, which can completely alter the meaning. Maybe I’ve turned a simple dietary restriction statement into an insult about their hair style or mother or something. That’s why I have it written in Chinese in my phone, and I just show them after a few speaking attempts.

After I explain to the server my garlic predicament—in whatever language–I usually encounter one of four responses:

(1) “Is that a real thing? I’ve never even heard of that.” I want to reply that there are probably many things they’ve never heard of, such as how the size of their tip is diminishing with each stupid thing they say. To get them to understand the significance of this, I always describe my affliction as an “allergy” since that sounds more serious. I also tell them that I will die if I eat it, right after my head explodes. That usually gets them to take me more seriously as well.

(2) “Can you have just a little bit of garlic?”  To which I want to answer, “Sure, then I’ll only have a little bit of explosive diarrhea in your bathroom later.” Seriously, it’s like asking me, “Can you drink just a little bit of antifreeze?” or “Is swallowing just half a razorblade okay?” An expat server in Shanghai explained that it’s possible there could be just a bit of garlic in the pan from a previous entrée. Did I really have to explain that dish washing detergents had been invented in Germany during WWI? 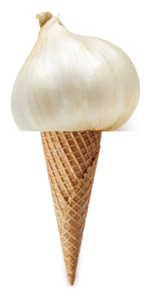 (3) “Well, you can always order off of the dessert menu, that’s safe! Ha ha!” And if this was true, maybe I would eat only desserts for the rest of my life and turn into Jabba the Hutt’s twin with scurvy. Unfortunately, some evil wizards devised a way to incorporate garlic into desserts too! Introducing Black Garlic Chocolate Cake with Raspberry Sauce with 3 teaspoons (15 mL) of black garlic. Or Roasted Garlic Ice Cream with 1 entire head of garlic. Or Garlic Brittle Cookies with eight to ten garlic cloves. The introduction to that recipe says, “Garlic is a mysterious flavor, and its sweet bite is a perfect complement to chocolate.  We bet no one will be able to guess the secret flavor in these cookies!” Garlic is mysterious? You can’t be mysterious when your odor can be detected from deep space. It’s like pouring gas or Chanel No. 5 into a Fiji water bottle and betting no one will detect the “secret” flavor.

(4) “Why would you come to a __________ (Italian, Middle Eastern, Korean, etc.) restaurant? There’s garlic in everything.” First, it’s always delightful to have a server question your dining choices—it really sets the mood for the night. Second, with few exceptions I don’t have a problem finding something safe on the menu at any restaurant, from Chicago to Shanghai. Of course this didn’t hold true at a Buffalo Wild Wings restaurant I visited last summer, where the manager informed me that literally EVERYTHING on their menu had garlic in it, including the burgers, wraps, and the damn salads!

Garlic hatred aside, I am not eating at a restaurant where some numbskull chef doesn’t have enough culinary creativity to come up with at least two herb options. Geez, go back to 7th grade home economics class. To accommodate me, they pan fried a plain chicken breast and plopped it on a bun with a single lettuce leaf and a not-so-ripe tomato slice. Corrugated cardboard never tasted so good.

I’ll have the pasta. Hold the bad breath.
Image: Photo by Engin Akyurt from Pexels

Fortunately, most restaurants aren’t so garlic forward, even Italian restaurants. Contrary to popular belief, garlic is not a staple of every single Italian region, as a server in Florida once tried to tell me. I’m sure the closest he had been to Italy was the Italian Pavilion at EPCOT Center.

For the uninformed, garlic is a staple in the SOUTH of Italy (Google it). Many classic Italian dishes like fettuccine Alfredo, invented in 1892 by Alfredo di Lelio in Rome, never included garlic. Did you hear that, Olive Garden? Just because you chuck a clove or three into your fettuccine Alfredo (and every other defrosted dish you serve) doesn’t make it right. In fact, many northern Italians (like our Italian exchange student many years ago) view those who eat and smell of garlic as second class or unsophisticated.

So there you have it. I may not be able to dive into a bowl of roasted garlic soup with garlic croutons served in tiny hollowed out garlic bulbs. But I’ll never be mistaken as second class or unsophisticated. Not even at the Olive Garden.