On Thursday I took my class on the first field trip of the school year. We visited a women’s cooperative where they create bazin, a hand-dyed polished cotton unique to Mali and known worldwide (well, except I had not actually heard of it, but I don’t get out much).

Rocking a bazin on the runway in Mali

Bazin is the mainstay of Malian fashion, used to make the boubous, which in my opinion is the best name ever for a robe and could provide much fodder for a sitcom:

Man: Those are some extremely nice boubous, ladies! And they hang so nicely on you.

Girls: (Recoiling in horror) What?! How rude!

Anyway, this fabric is absolutely stunning and I was dying (pun alert) to see how it was made as I heard the process was fascinating and backbreaking. My American Embassy contact who is the Community Liaison Officer–or CLO (pronounced “cloh” for those of us in the know) hooked us up with a local woman who owns a facility just across town. This resourceful gal started a small bazin operation a few years ago with just a few workers and now has more than 100 people working for her.

Fabric to dye for…

I knew I could work this in with some cultural lessons so we set a date, and thankfully my colleague who teaches grades 2/3 did a lot of the paperwork and organizing so I would just basically show up with my class. Before we went I found a couple of YouTube videos about the local bazin industry, and at this point I’m thinking there is a YouTube video on everything ever invented or mentioned since the dawn of time. My students were chomping at the bit after seeing these videos, especially knowing that this would be a participatory experience–although the details of that were a little fuzzy (more on that in a minute). I also found a great song in French by Malian singing duo Amadou & Miriam that talked about bazin. I used Google translate to put the lyrics in English so we could analyze them but the kids made more sense of them in French. I, of 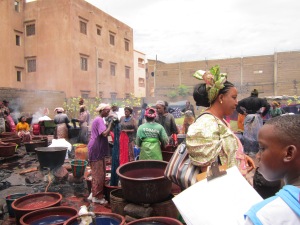 where the action happens (owner in foreground)

course, nodded and moved my lips as if I was reading and comprehending the French too though I’m not sure they bought it. Then I gave them an assignment: On the field trip they should document their experience with photos, videos, and writing so that next week we can create a music video about bazin, using the Amadou & Miriam song as a background. We will incorporate their photos, video clips, and poetry they will write once we return. They were quite hip to this idea, as well as the fact that we would be out of school for a large chunk of the day (that thrill is a universal one). On the day of the trip we loaded up 26 second through fifth graders, 4 teachers, 6  parents (2 Belgians, 1 American, 1 Canadian, 1 Japanese, and the Malian Prime Minister’s wife) into two small buses. 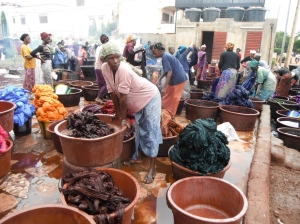 Now in terms of prior field trip experience, I am a seasoned chaperone of jaunts to high quality art museums, fancy theatre venues, and turn of the century Palm Beach mansions. I’m used to dealing with fancy docents, exhibitions of Renaissance art, and Broadway touring companies. So keep these lovely images in mind as I describe our day at the bazin business. After a quick lunch on the grounds of the American Club, the buses dropped us off on a moderately busy, unpaved road. Which was the venue. Seriously. We stood in the road for a large part of the afternoon, dodging motos and taxis and SUVs and

freshly dyed and waiting for the drying line

the occasional donkey and making sure the students were not run over/trampled. The bazin facility was on both sides of the dirt road. On one side was a building with not many windows or interior lights and a really long hall that the kids disappeared into. I believe this was where the white cotton material was stored or folded or something, but I accidentally left my Ray-Bans on so I couldn’t see a thing.  Somewhere in there I did score a free ink pen with the company’s name on the side. I don’t think I stole it, but it’s a possibility. The exciting part of the visit (and by exciting I mean like when a hungry tiger escapes into a zoo packed with visitors) took place across the street. This was the open air dyeing

Mr. Fessler! My hands are melting! My eyes sting!

grounds filled with Malian women hunched over giant black cauldrons heated by smoky wood fires. The cauldrons were full of boiling water, a sulphur chemical that bonds the color to the fabric, and various rich hues of bubbling dye. Everywhere there were stacks of freshly dyed wet fabric, plastic packets of that sulphur-based white powder, and lots of muddy puddles in many different rainbow colors. It was a massive beehive of colorful activity. The women wore elbow length rubber gloves and were constantly dunking brilliant white cloth into the water, or lifting out the colored results, or wringing it out, or pouring dye from one pot into another, or dumping the remaining dye onto the ground where it went into, um, the groundwater. Aside from the fact that smoldering campfires on their own produce one of my least favorite odors, there was the added scent of sulphur. So it wasn’t exactly like a romp through a lavender field in Provence. And really, what better place for a group of 7 to 10 years old to play for the afternoon? 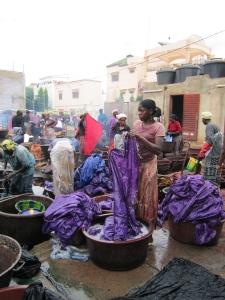 Each woman actually specializes in a single color.

The owner, a tall stately woman, was resplendent in a fancy boubou and head wrap. She began explaining this whole scene, albeit in French. One of our parents started to translate, saying, “So she says that this is like a training school as well as a bazin business.” Before he could finish his French-speaking son, one of my students, offered his own version of the translation. He piped in, “She takes in women who don’t know how to do anything AT ALL!” Kids say the darndest things. Despite the dangers of third degree burns and various respiratory illnesses, I still have to say this was an amazing site to see. The women folded the fabric into intricate shapes, triangles, squares, wiggly lines, and whatever. Then they dipped parts of the folded fabric into different dyes. It ends up in a color that looks like a cross between vomit and chili—until they dunk it in water and then it turns into a completely different brilliant shade. When it’s unfolded it has crazy, repetitive patterns that you can’t even begin to figure out.  The kids were dumbfounded (or maybe woozy from the fumes). One of my students said, “There is so much action here I don’t know what to write first!” I wondered, writer’s block or chemical-induced brain damage?

Next they hang the freshly dyed fabric on lines across the street to dry, which makes for quite the beautiful scene. After that they are stamped with some sort of resin and taken to two huts in the back of the property where a group of six guys place the fabric on a curved piece of wood, then pound the hell out of it with a mallet that looks like something Wile E. Coyote would try to hit the Roadrunner with. They slam those mallets down one after the other, never hitting each other (at least while we were there) but coming awfully close.

The pounding guys…it gave me a pounding headache

And oh yes, in case you’re wondering the kids were inches away from this action and also got to pound things with the mallets. But wait…there’s more! Each student received a piece of white fabric and a pair of gloves. Then they got to dunk their fabric into really hot dye-filled water. I held my breath this entire time, mostly because it smelled really bad but also because I was super nervous I would witness a scene from Final Destination 6. Thankfully there were no horror movie-like events, and we all made it back to the buses in one piece, skin intact (I did a head count of the kids twelve or thirteen times to make sure nobody had disappeared into a vat of orange dye).

All kidding and caustic chemicals aside, this was an incredible experience that really showed the kids how self-empowered African women use their artistic talent to rise above poverty. In a country like Mali, one of the poorest in the world, this is a big deal. Of course my students were worried about the health concerns these women face, as well as the environmental impact of the dyeing business. I told them these are exactly the kinds of problems they will be solving when they are adults, balancing human and environmental needs, and they better do their darn homework so they are well-equipped to deal with these pressing issues (hello teachable moment!). Plus it’ a great way to pass the buck to the next generation.

Today, a day later and the odd smells finally gone from our skin and hair, we are still marveling over everything we saw. The kids started writing their poems today and I have to say they didn’t miss a sight, sound, smell, or texture (I had reiterated that a sense of taste would NOT be part of this assignment). I’ll post a link to the finished music video when it’s complete—it should be quite the masterpiece. Obviously breathing in caustic chemicals did wonders for our creative abilities.

3 thoughts on “Chapter 10: Kids…Watch Out for the Boiling Water and Caustic Chemicals”