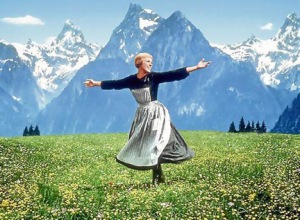 I don’t particularly fawn over raindrops on roses and whiskers on kittens. And if I’m ever finding myself in a situation where I notice “snowflakes that stay on my nose and eyelashes” I’m probably getting frostbite and my toes will eventually blacken and fall off.

But like Maria/Julie Andrews I actually do have a few favorite things, none of 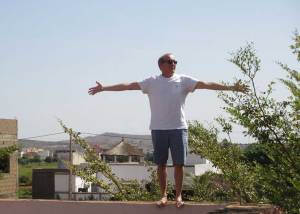 The African hills are alive with the sound of music.

which are Austrian-based at this time (though I’m not adverse to “crisp apple strudels”).

Nope, my favorite things all come courtesy of Mali. Which is good, I suppose, because I do live in Mali now. It would really blow to have lots of favorite things that were Malian and live in, say, a small town in Arkansas—though that would probably blow no matter what. I am extremely thankful that my Malian list of favorite things continues to grow and is much, much longer than my list of “Things That Drive Me Insane,” a list that was always growing when I lived in the States, particularly after a drive on I-95.

Speaking of thankful, I’ve noticed a lot of folks doing a daily “What I’m Thankful For” post on Facebook during the month of November. I thought about jumping on that bandwagon, expressing my gratitude for all my favorite things in Mali. But while I personally enjoy reading these “thankful” posts, there are others who, hmmm how do I say this politely, 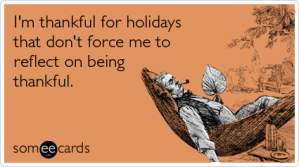 would rather gargle with bleach than read these. From the criticisms I’ve read, the critics don’t seem to complain about the concept of people being thankful (which I’m thankful for), but rather what they perceive to be the generic/sappy/not-so-creative nature of the posts. I must admit, it is interesting when someone shakes things up a bit, as with these “thankful posts” I saw online from someone named Therese Long of Pearson Education, someone I wish lived next door to me:

1. I’m thankful we don’t celebrate Thanksgiving in an old-fashioned way…invite everyone in my neighborhood to my house, have an enormous feast, then kill them and take their land. 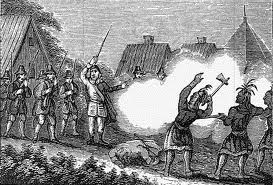 “Contrary to popular mythology the Pilgrims were no friends to the local Indians. They were engaged in a ruthless war of extermination against their hosts, even as they falsely posed as friends. Just days before the alleged Thanksgiving love-fest, a company of Pilgrims led by Myles Standish actively sought to chop off the head of a local chief. ” -from The Hidden History of Massachusetts

2. I’m thankful for watching football, making pumpkin pie, and saying the magic phrase that sends my aunt storming out of the dining room to sit in her car.

3. I’m thankful for 38 years of marriage to myself. I have always been by my side and understand me when no one else did.

4. I’m thankful you can delete status updates after 10 minutes of no likes.

5. I’m thankful Facebook is now the second place I have found comfort in talking to a wall.

6. I’m thankful that everyone who likes me is awesome and brilliant, and everyone who doesn’t, is a selfish jerk. Very weird phenomenon!

7. I’m thankful I don’t live in a bubble wrap factory, as I just don’t have that much self-control.

So to avoid any chance of my thankful posts being deemed “generic” (which for me would be the greatest insult EVER), my thankful things list will become my list of favorite things. AND I’ll bury this list deep in my blog where it will be safe from the scrutiny of the general public. Well, other than the 2726 views my Mali blog has racked up so far (!) from people in 52 countries (!!) including Madagascar, Qatar, and Bosnia and Herzegovina (!!!). Which is thrilling and scary at the same time. 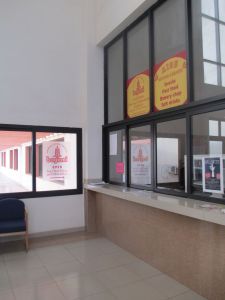 1. The American International School of Bamako lobby which includes a school store and…a bakery! I used to think my school in Florida was pretty cool because it had a soda machine, but a bakery in the lobby?! I’m pretty sure I dreamed this one time (“I was wandering through this school made of gingerbread and frosting, with a French bakery in the lobby and a swimming pool filled with gin and tonic and floaties in the shape of lime wedges, and all of the students were Oompa-Loompas.”).

To top it all off, it’s a French style bakery and the pastries and bread are warm when the bakery guy brings them in the morning. Chocolate or almond pastries are tied for my favorite. Oh, and apple. And the plain is good too. We have a standing order for 5 loaves of French bread (just 60 cents each) every Tuesday and Friday. And no we aren’t big, fat 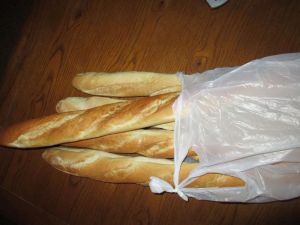 We always get enough just in case unexpected guests pop in.

pigs…they are skinny loaves and you never know when company might show up unexpectedly. The loaves are crispy on the outside and moist on the inside, and they taste good with anything, like peanut butter and jelly, butter, or gin. Well, gin goes with anything you know.

2. Malian drivers – I have yet to see one get ticked off or shoot the bird or scream profanities. Even if you pull out in front them. Or hit them. Honestly, we saw a car slam into a moto and knock it clean across the road. The moto driver got up and dusted himself off while the car driver checked to see if he was alright. Then they shook hands and took off. 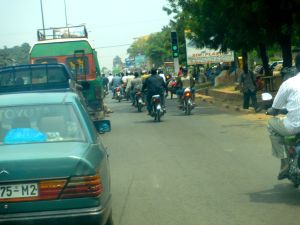 Out of one lane, many.

To put this all into context, there are basically few/no rules of the road here. If you need to get into traffic you just kind of pull your car into the flow of traffic and the person careening head-on toward you will slow and flash their lights and let you in. On the roads here you can also drive in just about any direction, in just about any lane, or between the lanes, or in the shoulder. Everyone just kind of accepts the traffic chaos and deals with it–without emotion or feeling like they rule the road. Plus they drive sloooooowly. How I miss those giant SUVs that used to zoom up behind my little car in Florida, driving 75 MPH about 2” from my rear bumper, the driver all red-faced and mouthing unclean words because I wasn’t going faster. Good times.

3. The Kora – a traditional Malian instrument I love so much I became one for Halloween. It has 21 strings and sounds like a cross between a harp, banjo, and guitar, and maybe a 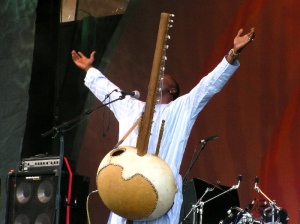 zither too. And it’s made from a darn gourd! Then there’s the way you hold it….

4.  Beverage choices circa 1957: If you want soda, it’s regular Coke made with actual sugar (not corn syrup), sipped icy cold from the famously-shaped glass bottle. No diet stuff, no added fake cherry or lime flavoring, no caffeine-free. Just Coca Cola like Beaver Cleaver drank it. 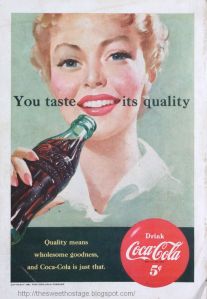 Actually we drink more water than anything else since (1) filtered water is free at school and (2) if you don’t drink a lot of water here you’ll faint.

5. Flag and Castel Beer – For rehydration purposes, of course. 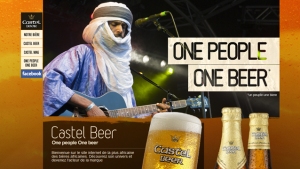 6. K’an Bεn, Our School Cat – No sad, caged hamsters at AISB. Nope, we have a school cat that roams the open-air interior

spaces of our school and just loves to be caressed by the kids. He has a weird, endearing meow that sounds like a cross between a cat and Ethel Merman singing.

7. Gingembre – Other than gin, this 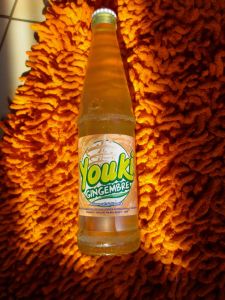 is my preferred bottled beverage in Mali, a carbonated, sweet, ginger juice drink that has a peppery aftertaste that makes you cough a bit. But in a good way. 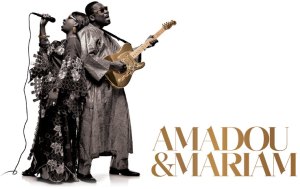 ethnic group from central Mali). They sing in French and Bambara, have opened for U2, and the kids in my class know the words to most of their songs. I move my lips like I do, mostly so I can appear to be cosmopolitan.

9. The Sounds Outside of Our Window – Wacky bird calls that I swear are from the “Voices of the Deep Jungle” sound effects CD, the chanty-sounding Muslim call to prayer far off in the distance, the rattle of vehicles as they bounce over our bumpy road losing parts, neighbors greeting each other in Bambara (which sounds kind of like arguing sometimes, unless maybe they are arguing), 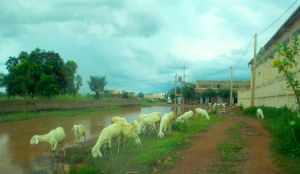 being herded to the slaughterhou….I mean to the daisy-filled meadow to frolic and play, the clip clop of a horse or donkey pulling a cart full of lime green weeds/ watermelons/garbage/kids/toaster ovens…

10. Speaking French & Bambara – It’s a slow process and sometimes curse-out-loud frustrating, but we are slowly learning to speak two more languages. The school guards and custodians are informally teaching us Bambara each day (I have a massive cheat sheet), Jamey takes a French class at our school once a week, and I’m still plugging (and cursing) away with my online Rosetta Stone French course.

We’ve been here just 3 months and we can already use our newly acquired language skills to ask for gas at the full service station, order at a restaurant AND tell them I’m allergic to garlic, purchase a variety of bakery goods (I practice this one almost daily), read the text messages from our local cell phone provider (last month one message told me I could win a sheep in one of their contests), give instructions to our mechanic, guards, maid, and/or gardener, and tell the neighbor kids to get the hell off our lawn (just kidding—the 24 hour guards and the 8’ wall around our property seems to take care of trespassers).

So…..when the dog bites, when the bee stings, when I’m feeling sad, I simply remember my favorite things, and drink G&Ts like mad. 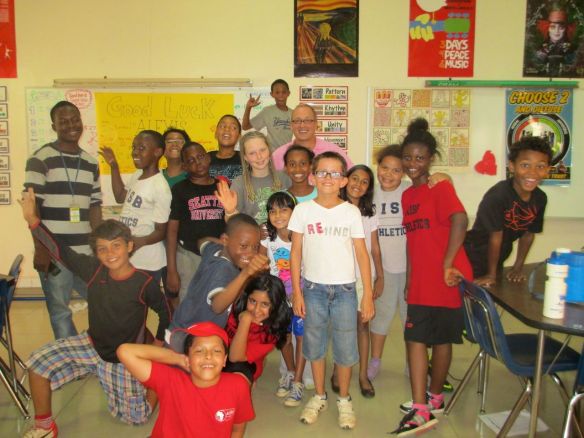 These are a few of my favorite things too…smart, creative students who keep me on my toes!